In our Facebook group, I told you that I would include a personal story since I received such positive responses from the one that I included in the last newsletter. So here it is:

Many of you know that I am a professional writer and have been for years as I’ve been published in numerous magazines and even a romance novel and a few ebooks.  I attended the Santa Barbara Writer’s Conference for many years each summer, enjoying a week in a room overlooking the ocean, attending writer’s workshops taught by some of the best in many different genres, and outstanding talks from well-known writers every evening.

One of the regular speakers each year that I attended was Charles Schultz — best known for Snoopy and Charlie Brown.  He was an interesting man and always let us in on some of the background for the comic strip.  One year he told a story that is appropriate for the world we live in today.

In 1968, Charlie Brown lost his beach ball while he was building a sand castle on the beach.  It was found and returned to him by a boy around the same age as Charlie Brown whose name was Franklin and they worked together to complete the sand castle. 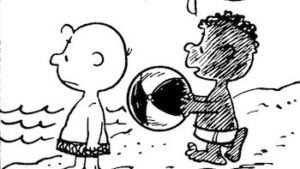 This was how Charles Schultz introduced the first black character in the comic strip.  It was the same year that Martin Luther King was killed so it was a big deal.  But what Charles Schultz told us was that he was reluctant to have a black character — not because he was a racist but because he didn’t know what it was like to grow up as a little black boy and didn’t think you should draw things unless you really understand them.  He understood Charlie Brown and the other characters because they were based on him and other white kids that he knew.

The idea for Franklin was the result of a letter from a California school teacher urging him to add a black character but he was afraid  it would be seen as patronizing the black community.  They communicated back and forth and eventually Franklin was born.  He and Charlie Brown had never met before because they went to different schools but they had so much fun together that Charlie invited him to visit him.  Franklin lived in a different neighborhood from Charlie.  He lived across town with Peppermint Patty, Marcie and some other occasional characters.  In one of the strips, Schultz drew Franklin sitting in a desk in front of Peppermint Patty which was his round-about way of endorsing integration.  He said that he got a letter from a Southern newspaper editor, telling him that they had enough trouble in the South without Schultz showing the kids together in school.

He said that, as a result, the President of the corporation that published his comic strips wanted him to change it but after a long discussion, he said,something like “let me put it this way — either print it the way I draw it or I quit.”  There was no further discussion.

This is just one of the many stories that I heard and took notes as I listened during the many (I think it was 15) years that I attended the Santa Barbara Writer’s Conference.  This is one that stuck with me many years later.