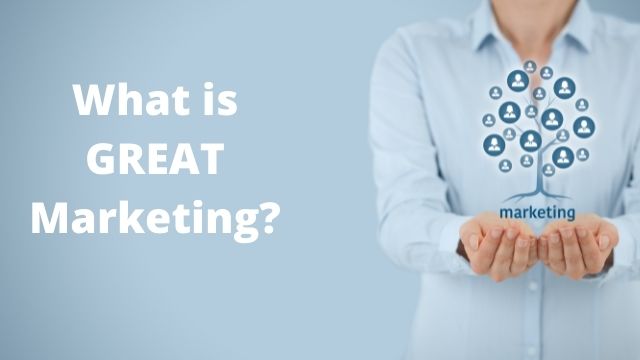 That’s the question that has been asked ever since the serpent  marketed the apple to Eve.  It’s like searching for the holy grail or the lost ark.

Why couldn’t we just dissect the marketing of a big company like Wine Country or Gifttree and duplicate what they do?  Because it wouldn’t work.

Why?  Because most of us don’t have their advertising budget and staff.  We have to depend on something else.

And one of the most successful is word-of-mouth “buzz.”  The thing that makes it so powerful is credibility.  When someone tells you about a great product, you believe them.  When you see it in a TV ad, you are skeptical.

The muscian Bonnie Raitt used to sing, “Let’s give ’em something to talk about!”  It’s common knowledge that getting people talking about your business can help grow it more than anything else.

Where does this word-of-mouth “buzz” begin?  It begins with YOU and what you do.  It begins with creating a quality product, providing exceptional customer service regardless of how much it costs, and being completely honest.

Marketing only works when it is absolutely believable.  If people sense that you’re playing games with them or trying to establish your credibility by trying to be someone you really aren’t, they won’t want to deal with you.

Deceptiveness is a boomerang.  If you’re trying to get word-of-mouth advertising or even attracting new customers, be honest from the get-go.  People don’t like deception.  When it is discovered, they tend to tell the world.  When the quality of Volkswagens began to deteriorate a number of years ago, I saw one at at traffic light that the owner had taped signs on the windows saying, “Don’t buy a Volkswagen.  They are lemons.”  All the millions of dollars spent advertising the company in TV ads and slick magazines was offset in my town by anyone seeing these signs.

One of the Phoenix TV stations has a segment called “Joe On Your Side” which deals with consuer complaints.  Recently, a family that had bought a solar panel system from a local company suddenly had their system stop working.  They were receiving high electric bills from the electric company because they weren’t providing solar energy as well as bills fro the solar company.  They complained to the company who just ignored them.  Then they complained to “Joe On Your Side.”

Suddenly, the system was fixed; a new electrical box was installed; they were given a refund as well as free energy service for several months.
The solar company was getting “Negative Buzz” by having their complaint aired on a popular television program.  Only then, did they step up to the plate and provide the customer service that should have been provided when the complaint was first made.

All “buzz”  about your business isn’t necessarily good.  Create good buzz about your business.  Stay on top of customer complaints so that you suddenly find yourself getting bad buzz.  Negative buzz is not easily forgotten even if, as this solar company did, you turn around and try to correct it after the bad buz has spread.

So start creating  “good buzz” about your business.; But be honest.  If it is true, word will spread.

GiftBasketNetwork is a proud supporter of: